Today I wanted to do a post that talks a little bit about Prohibition and its effects on the brewing industry and on the trays that are the focus of the site.

In early America per-capita consumption of alcohol was much higher than it is today and drinking often led to problems such as domestic abuse and political corruption through saloons. This led many women’s groups and evangelical Christian groups to promote a policy of Prohibition they thought would help lead Americans back to better morals and more responsibility.

Around the same time period in history other countries also tried Prohibition including Russia, Iceland, and Norway. The US ratified the 18th Amendment on January 16, 1919 and the law took effect with the Volstead Act outlining enforcement procedures on January 17, 1920. Prohibition would last until it was repealed by the 21st Amendment on December 5, 1933. During that 13 year period consumption of alcohol did decrease, but the demand remained and to fill the void organized crime and mobsters supplied alcohol across the country and concentrated power and money in the process.

Most breweries were obviously forced to close their doors as they could no longer stay in business producing beer. Some breweries were able to produce sodas, tonics or other non-alcoholic beverages, and some produced “near-beer” that was less than 0.5% alcohol (some of these include Pablo, by Pabst, Famo by Schlitz, Vivo by Miller, Lux-O by Strohs, and Bevo by Anheuser-Busch source: American Breweries II ), which was the threshold specified by the Volstead act.

Of the breweries that were open before Prohibition, less than half were able to reopen and resume production after the 13 year ban, although mass production and industrialization techniques were already slowly reducing the overall number of breweries in the US as early as 1880. Additionally, by the 1930s radio and later television had arrived as a mass market where products could be advertised to thousands and millions, which would slowly spell out the decline of the beer tray as legitimate advertising medium.

Below is a tray for the Bevo brew made by Anheuser-Busch: 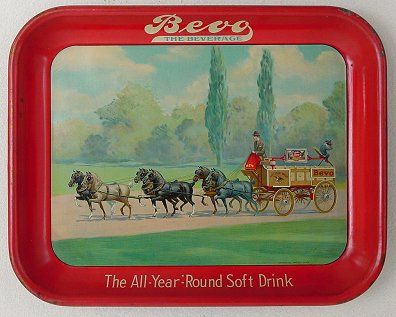