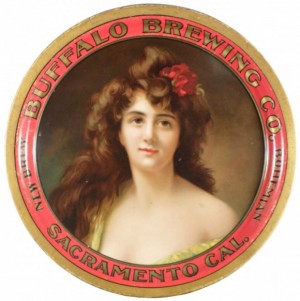 Beer trays have been used as a form of advertising since the late 1880s.  Over the years the composition of beer trays has changed.  The earliest trays were formed out of brass.  Nickel-plated beer trays followed shortly after.  Trays coated with a layer of porcelain enamel became very popular in New England and New York.  The porcelain allowed for easy cleaning and improved quality over time.   Tin was later incorporated as one of the main metals due its higher resistance to corrosion.  Tin was also a much lighter metal which many restaurants and bars in the industry favored. 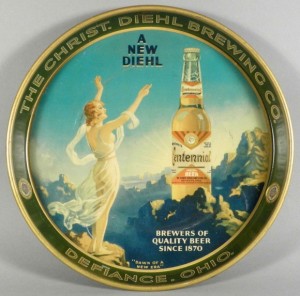 There are three main shapes that a tray will come in.  Round is the most common.  Rectangle beer trays with rounded corners were also produced.  Oval trays are the largest you will encounter.  You’ll also notice that some trays can have the same design and yet be from two or three different Breweries.  This was a common practice if the company had two or three brewing companies.  They would recycle designs to cut down on costs.  Designs used by breweries varied from beautiful women to ferocious animals. Some company’s trays would have just a standard and plain design showing the name of the brewery, while others could be considered serious works of art. 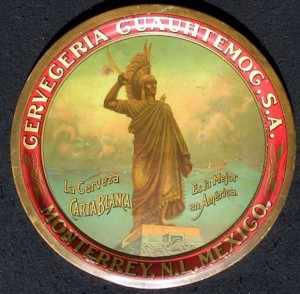