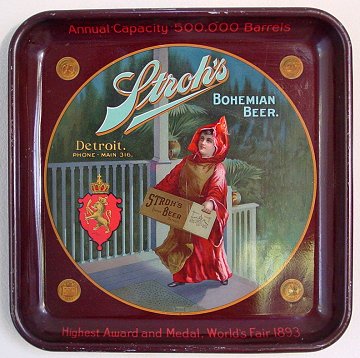 This is probably the rarest of any tray for Stroh’s and it was produced very early ( between 1902 and 1909 ). It advertises an annual capacity of 500,000 barrels of beer and that the beer had won the highest award at the 1893 World’s Fair. It shows a small girl in a red cloak carrying a case of Stroh’s beer with great color and unusual in the rounded square instead of round. The tray is 13″ square and was produced by the Meek Co. of Chicago, IL. It also notes the brewery’s location in Detriot and “Phone – Main 316”