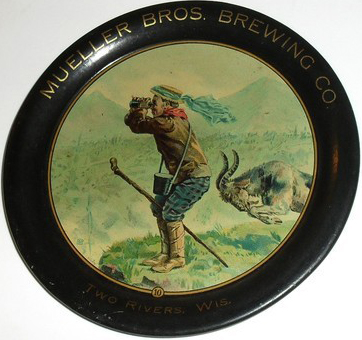 A boy in the center is looking through binoculars as a ram is about to hit him from behind. There are mountains in the distance, and it is assumed that the boy is on the edge of a cliff. The outer edge is a dark red, brown, and black mixture and the text is a shiny gold color.

The Brewing Company represented on this tray is Mueller Bros. Brewing Co. There may be multiple trays with this same design, but different Brewers. The price will be different based on Brewery and design combination.